Getting it wrong – with style

Now I know I’ve set this up as a purely book review blog, but I’ve decided to branch out a wee bit – variety being the spice of life and all that. So here it is, about once a fortnight/month or so, I’ll do a post on one of my other loves namely baking, crafting and writing. My aim is to keep these posts at least a little book related, but rest assured it will still be a blog mostly for book reviews.

With all that in mind I bring you to my first post!

It was the other half’s birthday last week and I decided to bake a cake. So far so good, I’ve baked cakes before, but in my infinite wisdom I decided I was going to do a superman cake. At this point I should probably mention I’ve not iced a cake in about 10 years since I iced one in Food tech.

But! I think it turned out okay, I mean the colours are a little off and the buttercream was nothing short of a disaster, but it tasted fine and that’s the important part. 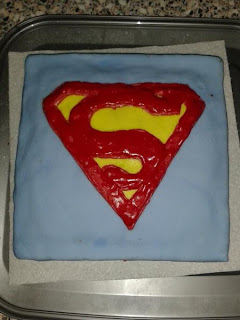 If you’d like to know how I did it, hit the read more for my scribble of a recipe 🙂
The Superman Cake
Ingredients
For the cake:
For the icing:
How I did it
Most families have various ways of baking a cake and mixing it together. I have friends who put milk into the mix and some who substitute for gluten free flour or want their cake to be eggless. If you have a method that works better for you, or you’re eyeing my recipe with a doubtful eye, then do what you know.
But for me, this is how I bake a cake:
The annoying part was letting it cool because I was massively impatient and wanted to crack on with the icing. But if you don’t let it cool it can make icing … interesting. Oh! And don’t put your cake tin to wash either – you’ll see why in a bit.
Anyhoo! So, the cake cooled and I had everything set up for icing. What did I do?
I grabbed a pair of rubber/plastic gloves. If you’re using food colouring – especially lots of different ones – then protecting your hands from turning an array of different colours is pretty much a must. I learned this the hard way.
So, for the base (blue icing):
Now for the fun bit! I’m quite fond of making buttercream. Mostly because the way I do it requires a lot of taste testing.
This next bit does require a piping bag and nozzle though. If you’ve never used one before well, there are various guides, but this is how I did it:
There you have it, that’s how I made my Superman cake. I’m still learning, and I did learn valuable things about how nothing involved in the cake making process appreciates hot hands. Or heat. Unless it’s cooking time. I had the buttercream start the separate because my hands were too hot, and the icing melted into the gloves (which is an excellent reason to keep dusting your hands with icing sugar).
Any thoughts? Perhaps there’s an easier way to go about this, if so let me know! I’m very much a novice baker 🙂

I’ve been baking since I was little. Well, when I was really little I remember sitting on the worktop watching my mum bake – that’s basically the same thing, right? And while I love books, Read more…

Things I did when I wasn’t blogging

I haven’t been blogging for a while. I’ve still been reading (and I’ve got some mini reviews coming this weekend) and as for what else I’ve been doing, well… I’ve been teaching myself how to Read more…